With the smell of a barbecue in the air and warm temperatures, ALTMANN GmbH welcomed their employees, together with their partners and children, at the second summer party on May 25, 2019. Just in time for lunch, Robert and Achim Altmann received their guests who could directly start their get-together with savoury meat and sausage snacks as well as a variety of salads and side dishes. After lunch and with nearly the whole staff being there, Robert Altmann took the opportunity to thank everyone for a further successful year of the ALTMANN company.

In the past 12 months, this success was not only due to projects such as "Tommy’s construction kit in Poland", the completion of five new 12-ton clean room cranes with twin hoists or the development of a belt hoist for the food industry which is made of stainless steel. An increase of staff also contributed to the excellent performance: nine new employees have been recruited by ALTMANN since July 2018 and two of them were able to get to know their colleagues even before their official entry thanks to the summer party invitation. Robert Altmann also honoured Konrad Seidinger's achievement who had passed his final exam as a welding specialist and appreciated the partners' understanding that sometimes his employees have to work overtime and come home later. Finally, he announced to his guests some necessary changes for the near future: whereas the new homepage design for better content networking takes place in the background, the starting extension of hall 2 by additional 760 square metres of production area is clearly visible. As of the end of September, the new annex building is to host the training department with its own small educational workshop as well as the central warehouse. With a sincere "It is a great pleasure with you!" Achim and Robert Altmann thanked their team for the outstanding commitment and for providing the right mixture of professional competence and humour. Afterwards, they invited the accompanying partners to participate in a guided tour through the company.

With a practical present, the management thanked the wives and partners of the staff who are no less important for that success. They are the ones who support their husbands in this respect and also tolerate special operations.

After this excursion, the opening of the rich cake buffet started and suddenly the kids were there again. Right from the start, they were busy with riding bobby cars and tricycles, having fun in the bouncy castle with integrated slide or they were playing and crafting in their own tent, child care included. 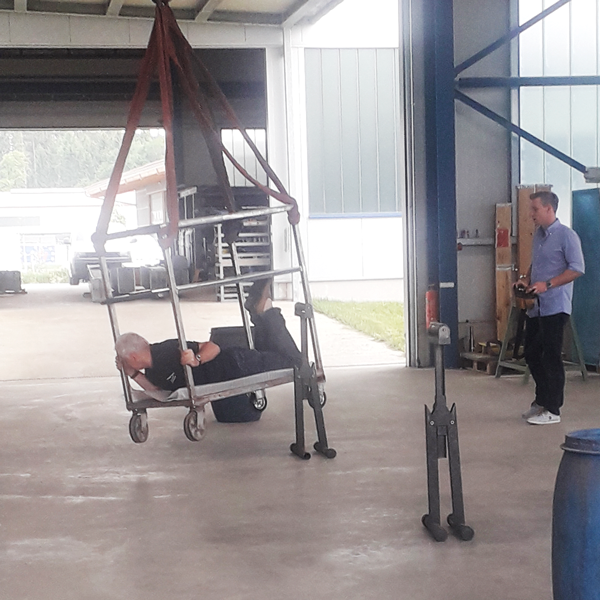 To provide fun for the adults, too, the Altmann brothers demonstrated a very special game of skill: the "crane conductor" had to move his partner through a lap of barrels and trestles as fast as possible, the partner sitting in a transport vehicle hanging on the crane. All the teams achieved the goal with much laughter and countless tactics. However, the main winner of the day was the organizer of the party: Sabine Altmann. She had managed to calculate the size of the tents sufficiently so that the party could go on in good mood until 22:30, despite the rain that started late in the afternoon.

We at ALTMANN GmbH would like to thank all our guests for coming and we are looking forward to the next summer party we can organise for our employees.